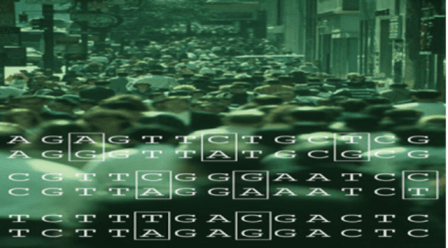 The main aim of the 1000 genomes of project is to sequence the genome of 2504 people from 26 populations around the world from five ancestral groups (West African, East Asian, South Asian, European, and the Americas) and it ran between 2008 and 2015. All individuals were sequenced using whole genome sequencing and targeted exome sequencing method. The genome of human is remarkably similar to each other but every thousand position within genome of each individual is different in single letter (A, T, G, and C). By sequencing genome of 2504 people, scientists characterized SNP (single nucleotide polymorphisms) and much genetic variation across the genome of the individuals. They analyses the distribution of SNP density along chromosome and this will give idea about which chromosomal regions are affected. SNP is defined as the single nucleotide bases differences in genome sequences. The variations in genome sequences underlie differences in our susceptibility to, or protection from, all kinds of diseases; in the age of onset and severity of illness; and in the way our bodies respond to its related drugs. For example, the single base differences in the APOE gene cause Alzheimer’s disease, and a simple deletion of nucleotide bases within the gene CCR5 leads to resistance to HIV and AIDS.

The 1000 genomes project data readily available and free to use. The genomic regions that are responsible for various traits of medical importance, such as response to a drug or susceptibility to a disease, can be identified with the help of data present in this project. 1000 Genomes Project has data that are highly valuable for studying both rare and common human diseases. For example, the data help investigators establish the frequency of any genomic variant that they encounter. These data are also powerful for studying the demographics and history of human populations.